From a retired police officer who wrote the following:

As a law enforcement officer, I have been approached by several people lately wanting to know how to identify a Meth Lab. The following are four (4) photos, it should be pretty obvious which one is the Meth Lab.

And a bit more 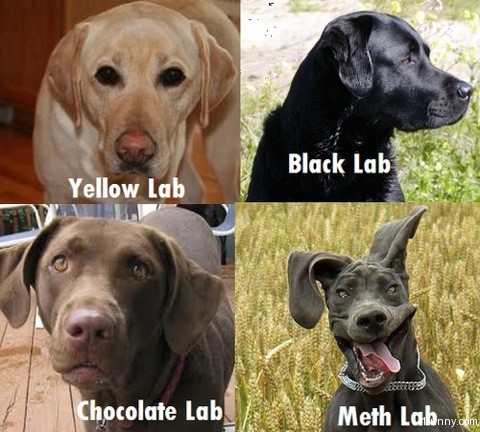 1.      From 9 Sep to 23 October 2011, you should read the sports section of the newspaper so that you are aware of what is going on regarding the World Cup, and that way you will be able to join in the conversations.

If you fail to do this, then you will be looked at in a bad way, or you will be totally ignored. DO NOT complain about not receiving any attention.

2.      During the World Cup, the television is mine, the VCR and DVD are all mine, at all times, without any exceptions. If you even take a glimpse of the remote control, you will lose it (your eye).

3.      If you have to pass by in front of the TV during a game, I don’t mind, as long as you do it crawling on the floor and without distracting me.If you decide to stand nude in front of the TV, make sure you put clothes on right after because if you catch a cold, I won’t have time to take you to the doctor or look after you during the World Cup month.

4.      During the games I will be blind, deaf and mute, unless I require a refill of my drink or something to eat. You are out of your mind if you expect me to listen to you, open the door, answer the telephone, or pick up the baby that just fell from the second floor….it won’t happen.

5.      It would be a good idea for you to keep at least 2 six packs in the fridge at all times, as well as plenty of things to nibble on, and please do not make any funny faces to my friends when they come over to watch the games. In return, you will be allowed to use the TV between 12pm and 3pm, unless they replay a good game that I missed during the day.

6.      Please, please, please!! If you see me upset because one of my teams is losing, DO NOT say ‘get over it, it’s only a game’, or ‘don’t worry, they’ll win next time’. If you say these things, you will only make me angrier and I will love you less. Remember, you will never ever know more about rugby than me and your so called ‘words of encouragement’ will only lead to a break up or divorce.

7.      You are welcome to sit with me to watch one game and you can talk to me during halftime but only when the commercials are on, and only if the halftime score is pleasing me. In addition, please note I am saying ‘one’ game; hence do not use the World Cup as a nice cheesy excuse to ‘spend time together’.

8.      The replays of the tries are very important. I don’t care if I have seen them or I haven’t seen them, I want to see them again. Many times, and record them.

9.      Tell your friends NOT to have any babies, or any other child related parties or gatherings that requires my attendance because:

10.  But, if a friend of mine invites us to his house on a Sunday to watch a game, we will be there in a flash.

11.  The daily World Cup highlights show on TV every night is just as important as the games themselves. Do not even think about saying ‘but you have already seen this…why don’t you change the channel to something we can all watch??’ the reply will be: ‘Refer to Rule #2 of this list’.

12.  Please save your expressions such as ‘Thank goodness the World Cup is only every 4 years’. I am immune to these words, because after this comes the reruns of the Rugby World Cup, etc etc.

13.  And finally, if you are female and your “man” likes rugby less than you, he is not a real man and shall be bound by these rules and additionally be referred to as “the woman” for the duration of the World Cup.

Thank you for your cooperation.

Men of the world

Spent a quite morning in anticipation of the long flight home that evening. Got to Heathrow at about 4 PM and flew out at 7 . Didn’t sleep at all on the plane .

I really think I could fall in love with rural England . The people and the sense of history are awesome.

Thanks to Mo and Roger for the accommodation and the use of a car . Hope to do the same again next year

We decided to give London a miss and went and did some local sightseeing instead . Had quite a nice English (duh) breakfast in Haynes and then went to a few other local villages

Went into a Staples store on a whim and saw a very nice android tablet with detachable keyboard . Spent a few hours driving around comparing prices , didn’t realise how big Milton Keynes is .

Vettel lost the lead to Alonso when his second pit stop went disastrously wrong. He lost further time behind Lewis Hamilton and could not bridge the gap to the Ferrari driver.

It was Alonso’s first win of the season, the 27th of his career and his second at Silverstone. Earlier in the day he had driven the Ferrari which won this race 60 years ago and he was proud to have delivered the win on such an important anniversary, which underlines how long Ferrari have been in F1.

“It’s difficult to know what would have happened without the problem of Sebastian. It’s not easy to overtake so for sure the pit stop problem helped,” said Alonso.

There was heavy rainfall in the hour before the race start, particularly around the old pits building and the complex of corners leading to Copse.

So wet was the track, with Perez losing control on the formation lap, the intermediate tyre was the only choice for the start.

Sebastian Vettel won the start against his team mate the pole sitter Mark Webber. Vettel got a perfect getaway, while Webber bogged down. Starts have been a consistent problem for Webber all season and the initiative he had gained in qualifying was lost in the first 200 metres of the race.

Button got a good start up to fourth from fifth on the grid., as did Lewis Hamilton, who made up four places on the opening lap.

Schumacher was the first to take the soft slick tyres on lap 11, he was forced to stop after sliding into Kobayashi and losing his nose cone.

As he set fastest sector times, Button switched too, with Alonso and Webber coming in a lap later,as did Hamilton.

Vettel had the luxury of taking an extra lap before making his stop. Vettel had a 6 second lead before the stops and afterwards it was down to 3.3 seconds.

The McLaren worked well on slick tyres on a damp track; Button passed Massa for P5 and shortly afterwards Hamilton passed Alonso on the wettest part of the circuit for third place.

Webber closed up on his team mate on the slick tyres.

Hamilton’s tyres began to drop off and Alonso was able to repass him using DRS on the Wellington Straight.

Paul Di Resta was going very well in seventh place, lapping faster than the cars behind including Rosberg’s Mercedes, but a disastrous stop on lap 26 cost him a lot of time. The team was ready for Sutil. Then Di Resta’s race was ruined by contact with a Toro Rosso.

A disastrous stop for Vettel also cost him the lead to Alonso. On a track still damp in parts the lesson was that old tyres up to temperature were faster than brand new tyres. Alonso and Hamilton used this to undercut Webber and when Vettel had his problem, both men found themselves ahead of the world champion.

As Alonso drove away from them, Vettel was faster than Hamilton and had to try to make a pass.

Alonso was almost two seconds a lap faster than Hamilton around lap 32. Still Vettel didn’t try a move on Hamilton.

Red Bull had to wait until lap 37 to pit Vettel –because any earlier and he may not have made the finish –and he duly undercut Hamilton for second place.

Alonso pitted a lap later and maintained his 10 second lead. Button pitted at the same time but his front right wheel not wasn’t attached and he had to stop the car at the pit exit.

The new interpretation on Engine mapping for blown diffusers meant a change in fuel consumption for the race and with 15 laps to go Hamilton had to go into fuel saving mode, allowing Webber to close on him and pass for a podium place with five laps to go.

At the front Alonso was able to continue to drive away from Vettel, who fell into the clutches of Webber at the end. But the Australian was told by the team to ‘maintain the gap’ and did not try a pass.

Meanwhile Toro Rosso’s Jaime Alguersuari got into the points from the lower third of the grid for the third race in a row.

Blue skies for a change - but it didn't last 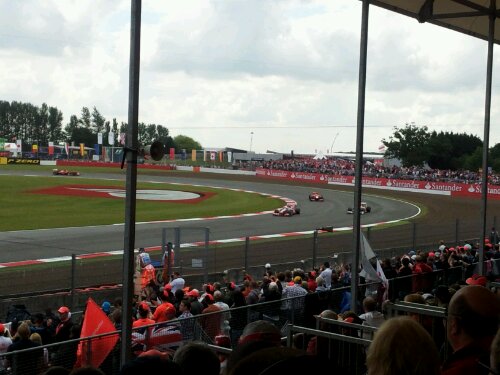 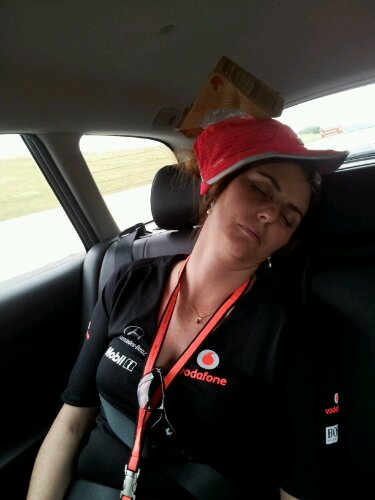 The day really took it out of Dena 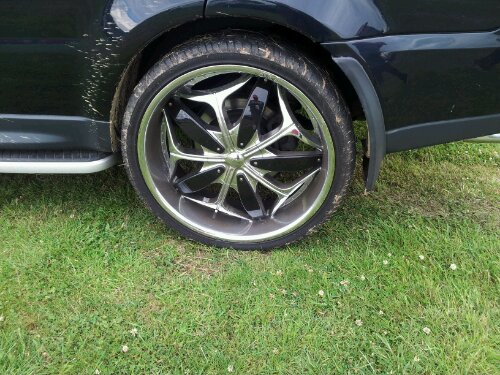 Left 45 mins later than planned, but due to some stunning driving by Mandy (which might get her arrested when the video is viewed) we made it in time to see the end of GP3 qualifying. The weather is also better so far with a dry track. F1 third practice next. Watch this space.

Practice went off without any rain. The cars were almost 20 secs quicker than yesterday which made it a lot louder 🙂

Qualifying went OK, with just a bit of rain, but McClaren didn’t do that we’ll despite all the local support 😦

Stayed for the GP2 race as well which was quite good

Freezing cold so far. Managed to see the last 45 min of practice 1. Quite slow because of the wet track. The GP2 cars where a full 5 secs quicker because the track was dry

Rained again for most of practice 2

It was raining again when we left

I would suggest hiring a fanvision console for the race weekend

Hopefully we will have better weather tomorrow 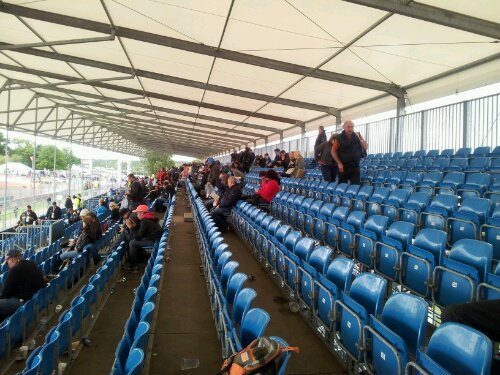 Stands emptying out because of the rain 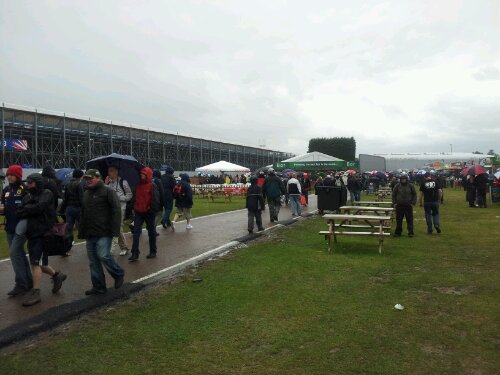 The last of the hardcore fans leaving (Dena, Phillip and Mandy) 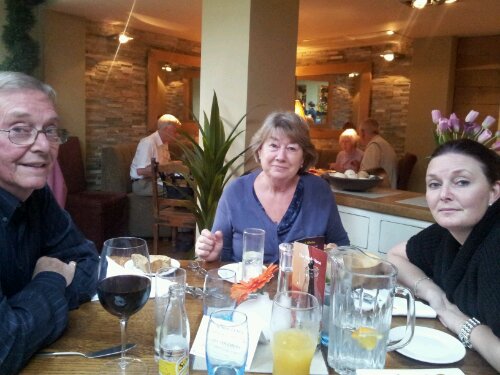 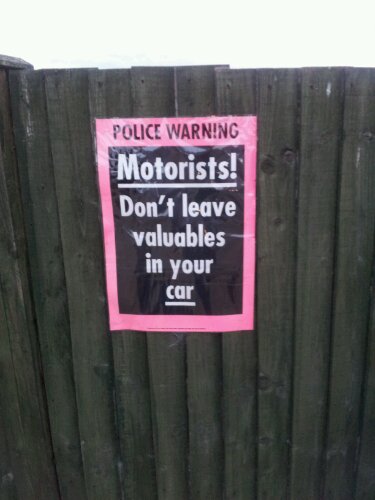 Not only in SA 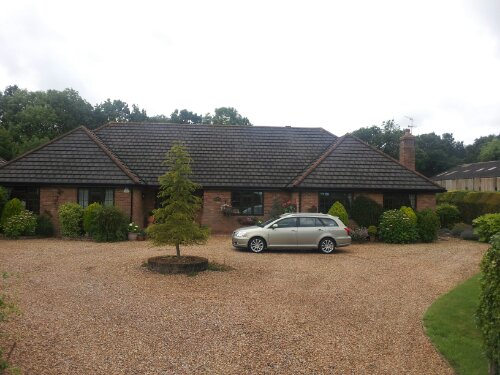 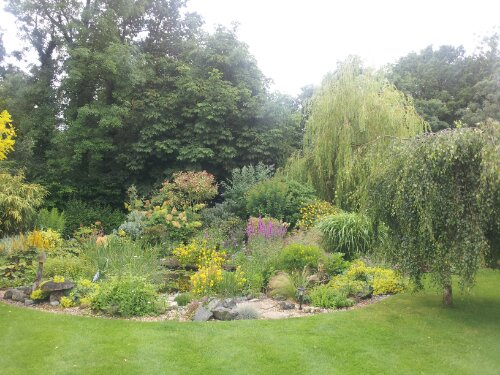 After sitting in the rain for almost 3 hours earlier this year at the Top Gear show at Kyalami, waiting for the Red Bull F1 car to go out, and then having it only do one lap, we decided that life was too short and we needed to go to a Grand Prix.

Silverstone was an obvious choice as Mandy’s folks live very close to the track.  Philip and Dena agreed to join us.

Tuesday 5th July
Flew out from O R Thambo on BA departing 7.30 pm. Arrived at Heathrow 5.30 am local time.  Spent the morning catching up on sleep and then went shopping.  Bought myself a little present to remember the Grand Prix by