Initially Colin Brown was meant to travel with me as Mandy couldn’t get any leave , but as he cancelled less than a day before we left, I ended up travelling alone .  I was joined by Phillip and Dena Sprules (who flew into Maun) , as well as by Nick and Hester Coetzee.

We had a fairly late start, meeting at the Petroport just north of Pretoria, destination Khama Rhino Sanctuary. 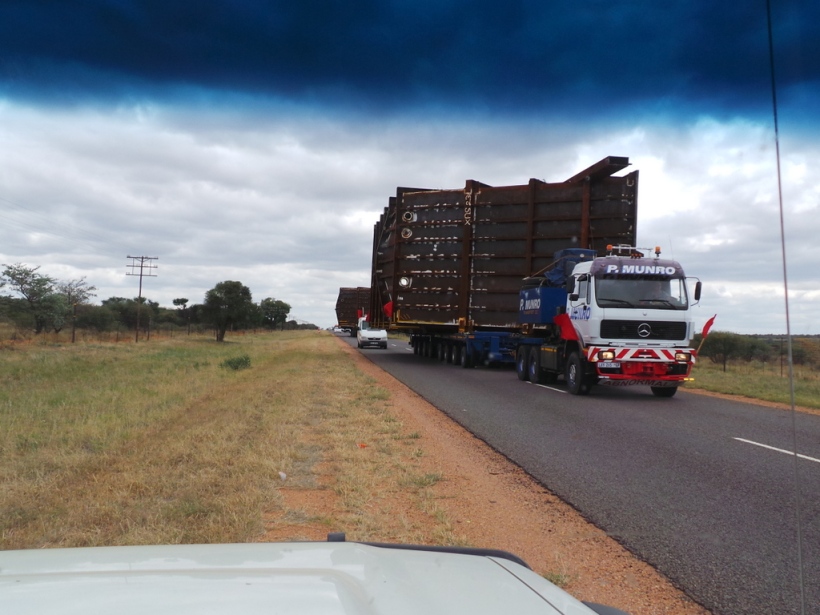 Not sure what this was , but it won

After refueling in Ellis Ras, we crossed at Parr’s Halt. The border post was very quiet, with ours being the only vehicles there.  Both sides took less than 5 mins each.

We stopped for lunch at Nandos in Palapye, and reached Khama at about 3.30.  All in all a very easy day. 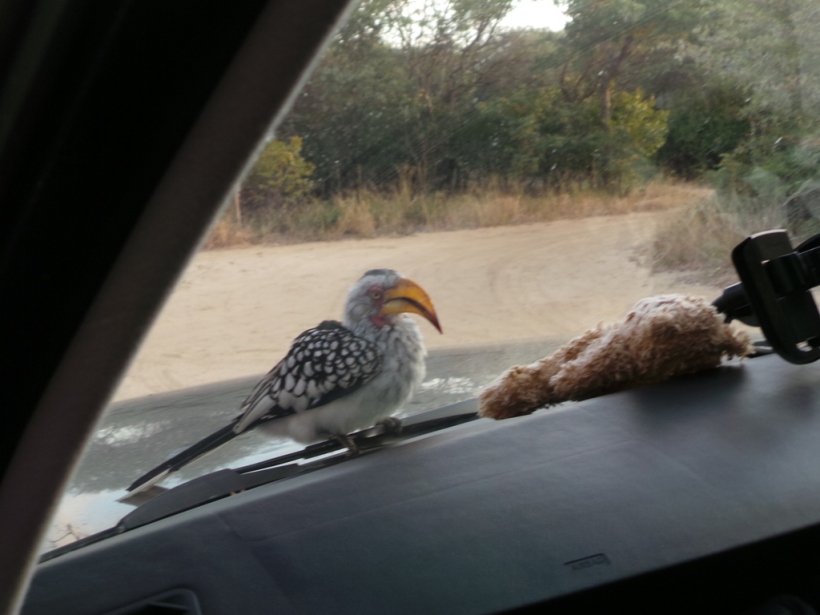 A hornbill trying to molest Dusty through the windscreen

Hmmm do I have enough guidance ?

Another slow start for us, as we only had to make Mankwe Bush Camp which is about 60 km past Maun.  Phillip left at 7 AM though as he had to collect Dena at Maun Airport.

We made Maun at about 1.30 and went chair shopping at the local midas, as Nick and Hester had forgotten theirs.  Phillip and Dena went ahead to Mankwe.  After lunch at Nandos (yes again) we left for Mankwe, arriving there at about 5.  It was pretty much as I remembered it, if a little bit run down.  We had another early night, with the only game being some elephant wrecking a tree at about 5 the next morning. Quite a contrast to out previous visit, when we where visited by hyena and had lion close by.

I also discovered that the smell I had noticed that morning was all my FRESH milk , which I had somehow mistaken for long life milk , and stored in a wolf pack ,had finally all gone off .

Doh -it’s all in the lable

Oh look – a landy with an open bonnet . Actually it was a problem with the battery management system and not the car .

We decided to head for Chobe via Mababe gate and see if we could spend the night at Savuti. I head heard lots of reports saying that you couldn’t book camping at the gates anymore and that it all had to be done through the central booking office, but we decided to take a chance, with plan B being that we would continue through the park and camp on the other side.

When we arrived at the gate, we where told that the camps had recently been privatised (http://www.sklcamps.com/camp.html) and that it was indeed possible to book at each camp, providing that sites where available,  so we continued on to Savuti.

The camp has become disappointingly commercial, with them in the process of completing tented accommodation and a central dining/bar area.

We went to the waterholes as usual, but saw very little game. 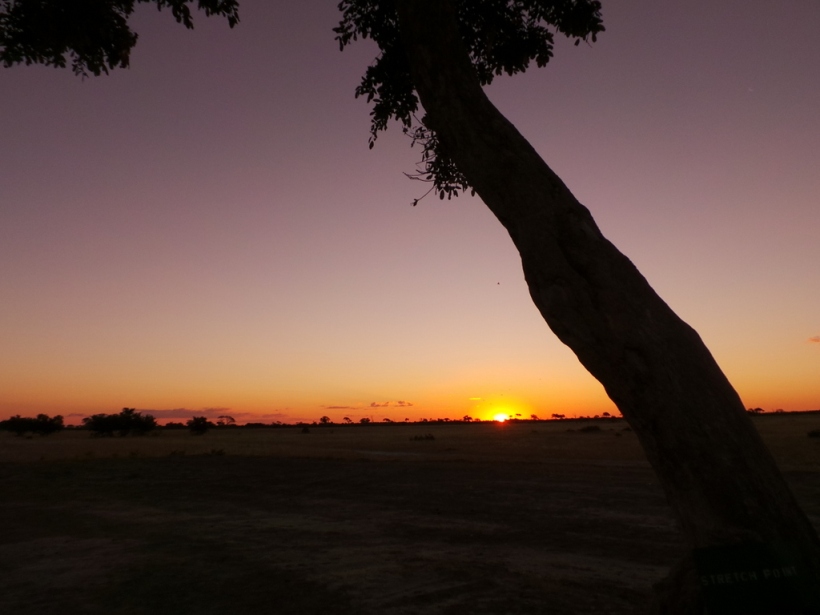 The other big difference is the bridges over the Savuti Channel, as it has been flowing for the last 4 years. 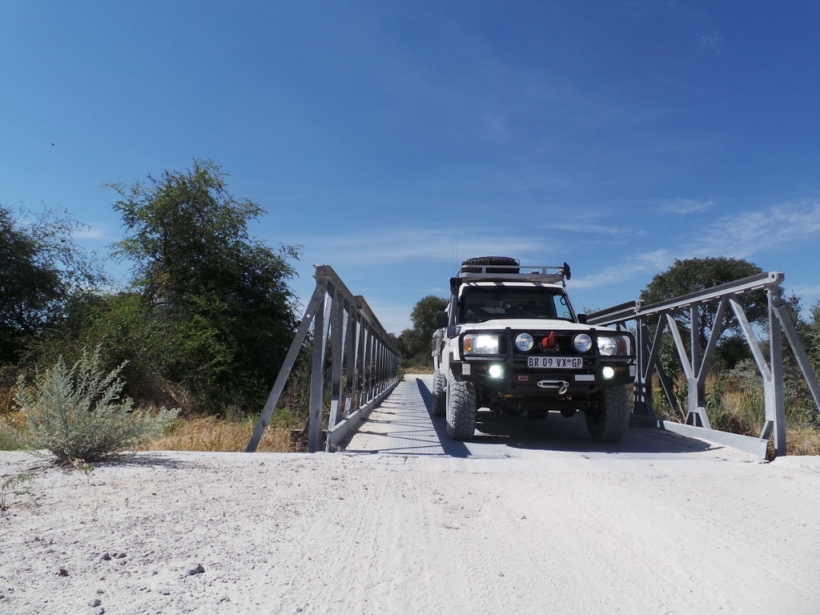 Quite a few beers were consumed that night, especially by yours truly, as we were entertaining an American guest who was camping next to us (another new development for me – Americans , not the entertaining part) 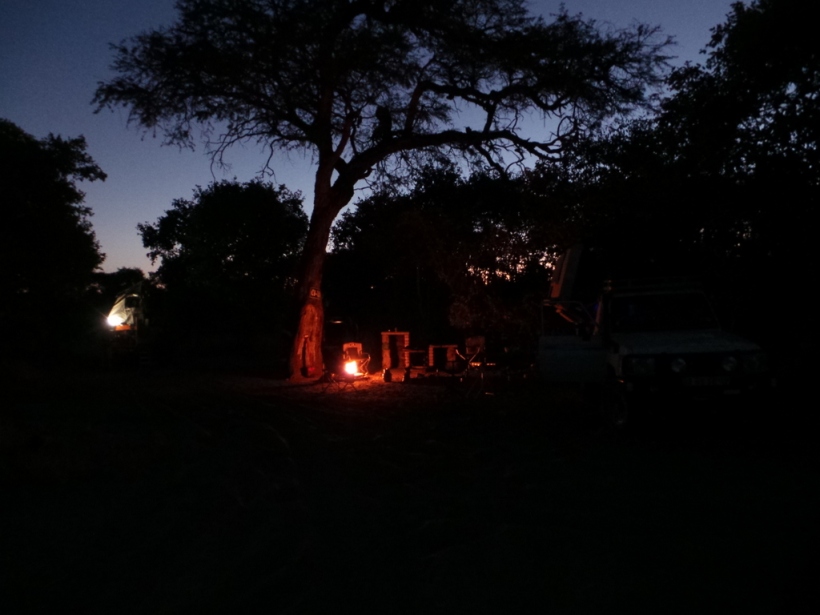 Unlike past visits, we heard no night noises, not even jackal or hyena.

We left for Ngoma Bride Border Post , destination Katima Mulilo . Another easy day , and the first elephant sighting as we were leaving Chobe !

The lack of game and even bird sightings for Phillip has become quite a point of concern . Hopefully they are still out there and it’s just the wrong time of the year.

We saw a few buffalo a few kilometers later ,and then right after that a herd of cows .

The border crossing was a breeze again , and we were soon on our way to Katima to go find the Cross Border Tax office and to refuel

As we didn’t really have an idea of where to stay , we headed back out of town and I searched for camping spots on the GPS . The closest was Namwi Island Lodge , which was a pleasant surprise  The only down side was a bunch of noisy brat kids , but Dena soon used her school teacher training and voice on them and the more or less got the message . 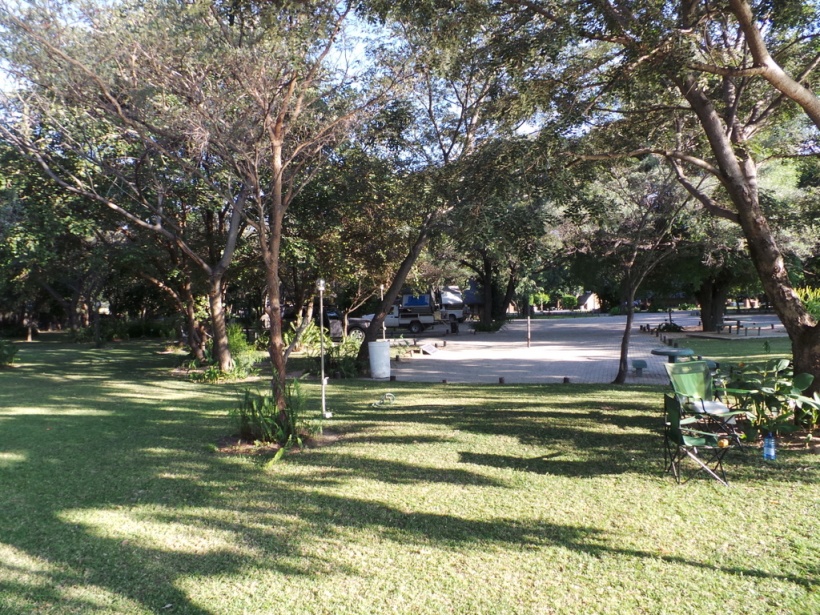 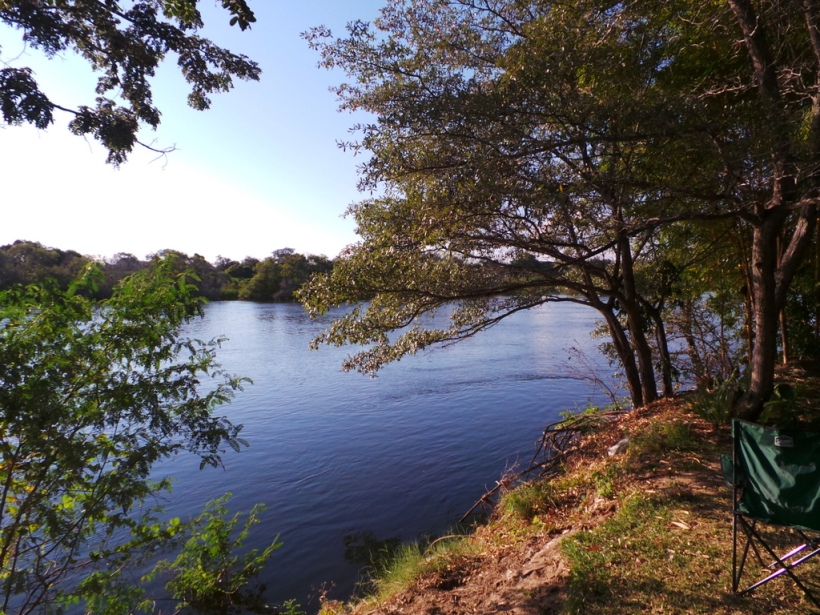 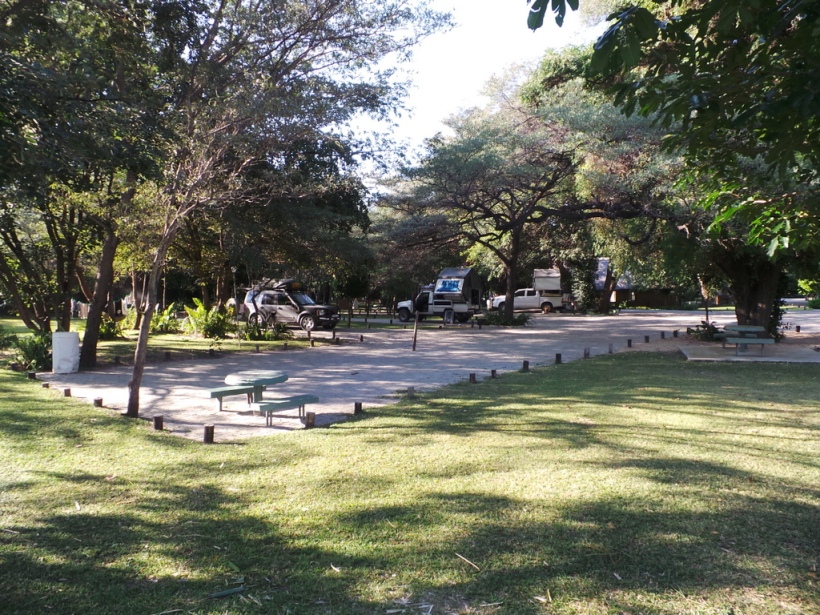 We headed back to Katima and the border crossing. The Namibian side again was very quick and then we took about an hour on the Zambian side. We exchanged USD for Kwacha and headed for Mutemwa Lodge , as this was the  place mentioned in the magazine article . There has been a revaluation of Kwacha , along with new notes. (The rand is now 2 to the kwacha)

We followed the GPS to Mutemwa Lodge and the road progressively became less traveled , and we even had a small water crossing in the process. Turns out we had used the old road , and a new one was just a bit further along , but wasn’t yet on T4A .

We arrived at the lodge and were met by Penny , one of the owners. She mentioned that they were not set up for camping , but suggested we try Kabula Lodge , a little further down the road

When we arrived at Kabula , we were met by the manger and again had the whole place to ourselves , including the keys to the bar , as he lived offsite. Amazing how the honour system is still alive and well outside of South Africa 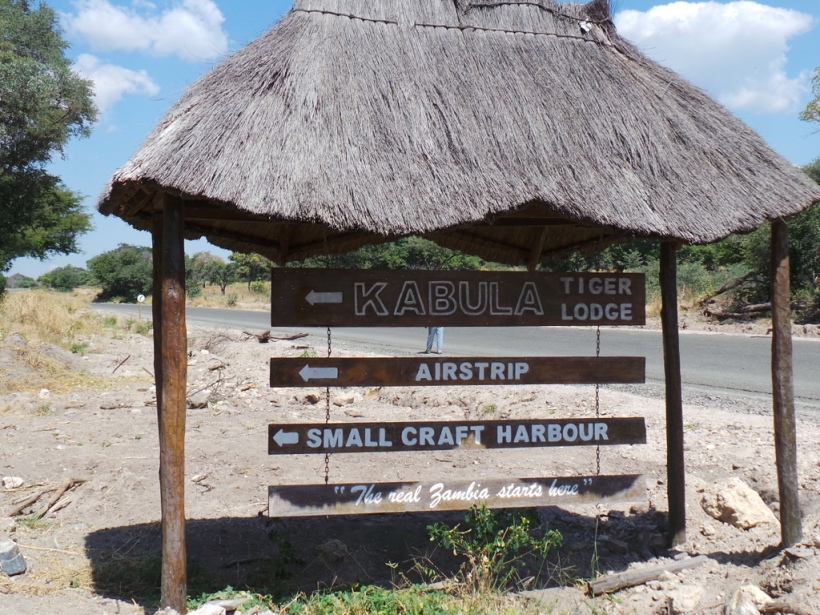 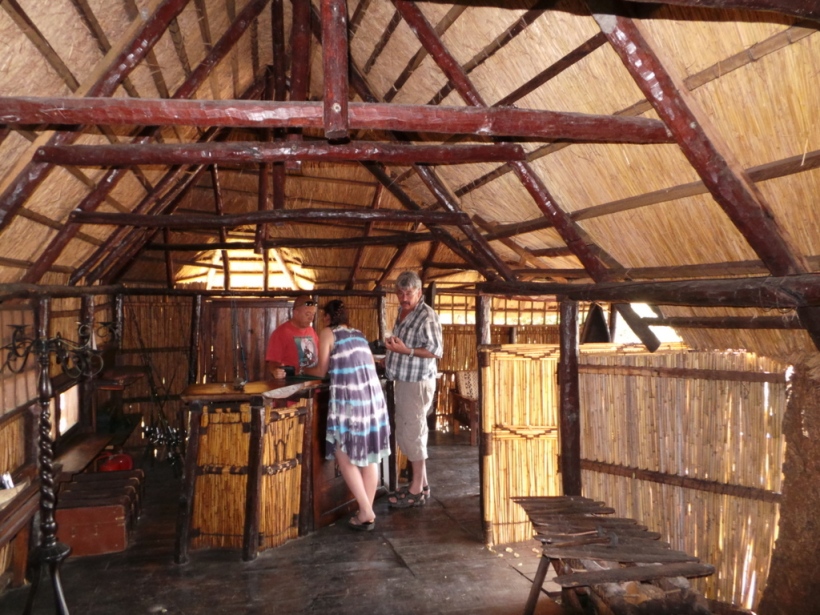 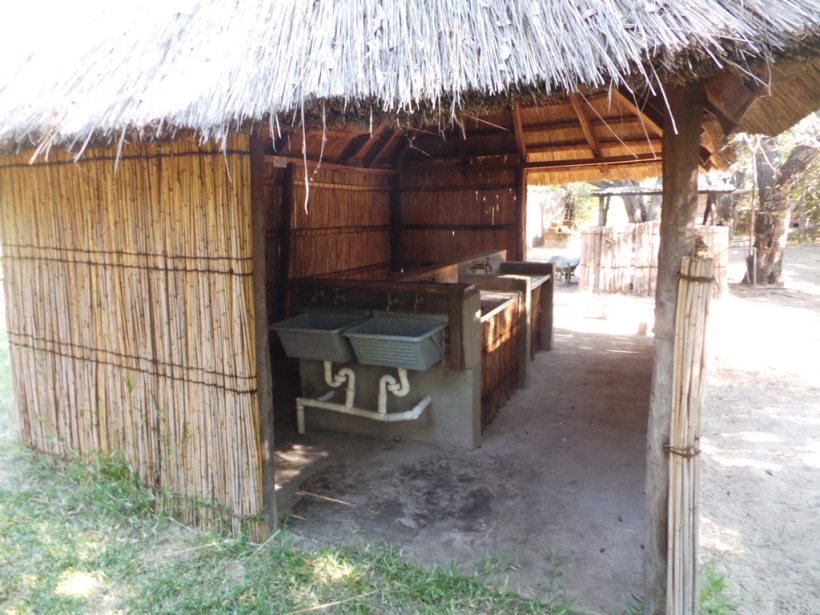 Phillip’s car had developed a grinding / clunking sound from the front diff , so we went for a drive after lunch , to see if we could find the problem, but to date it is unresolved , with the car needing to go to a mechanic for further diagnosis .

Based on Penny’s recommendation , we decided to first go check out the Ngonye Falls before proceeding back down south to go into the park .

The falls themselves weren’t that impressive , probably because of the high water levels

but the campsite had an awesome private beach ,

so we decided to delay our trip into the park and spend a day there . The campsite is quite rustic , but includes a camp attendant who was very friendly and efficient.

He made the campfire ,heated water for the bucket shower and, a nice touch IMHO , come around at about 9 PM to check if we were still happy.

He also tidied up the camp and did the dishes the next morning , just after sunrise . 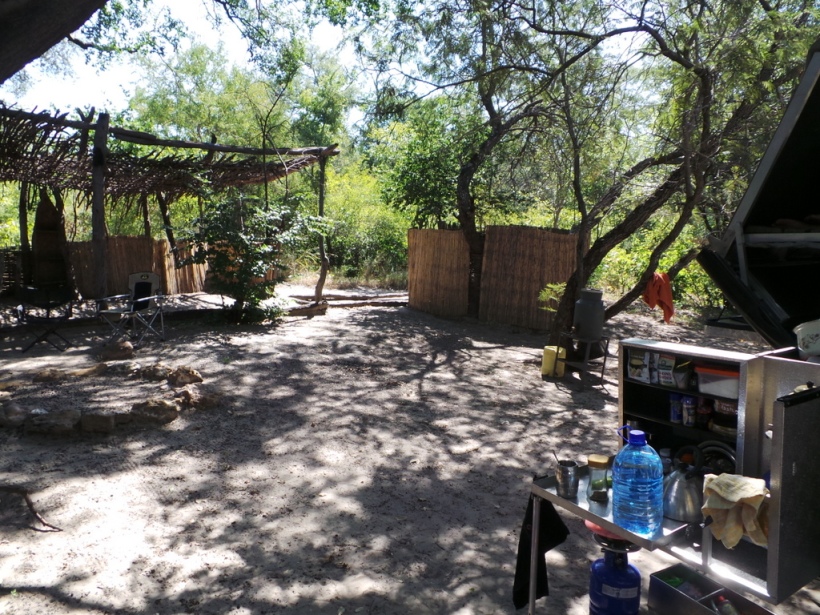 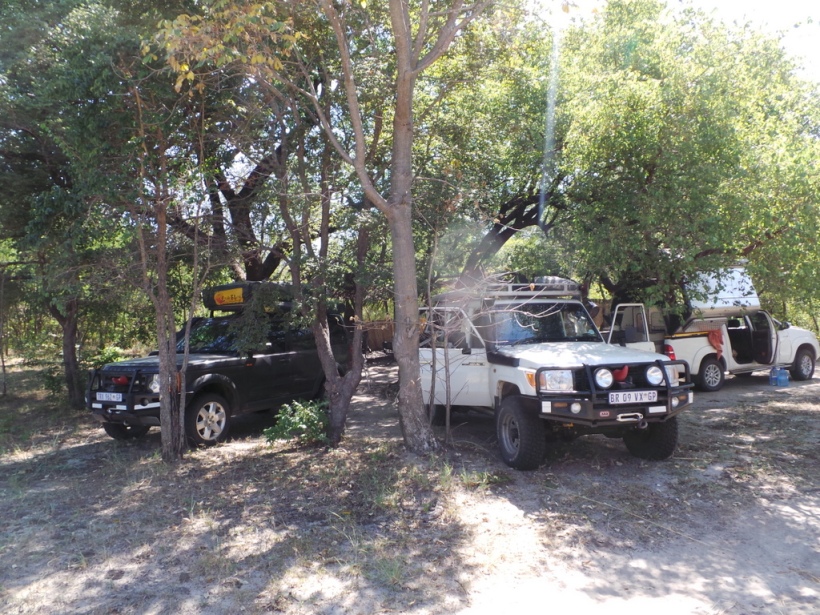 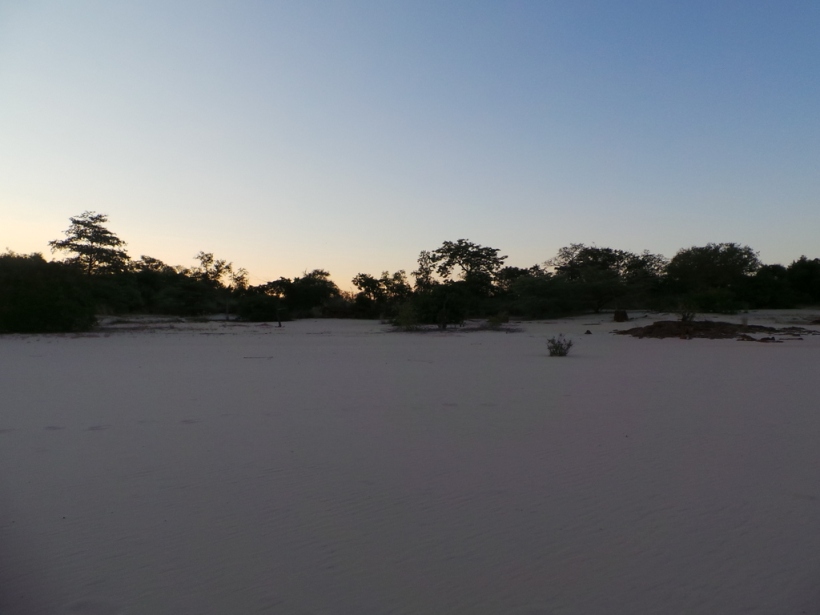 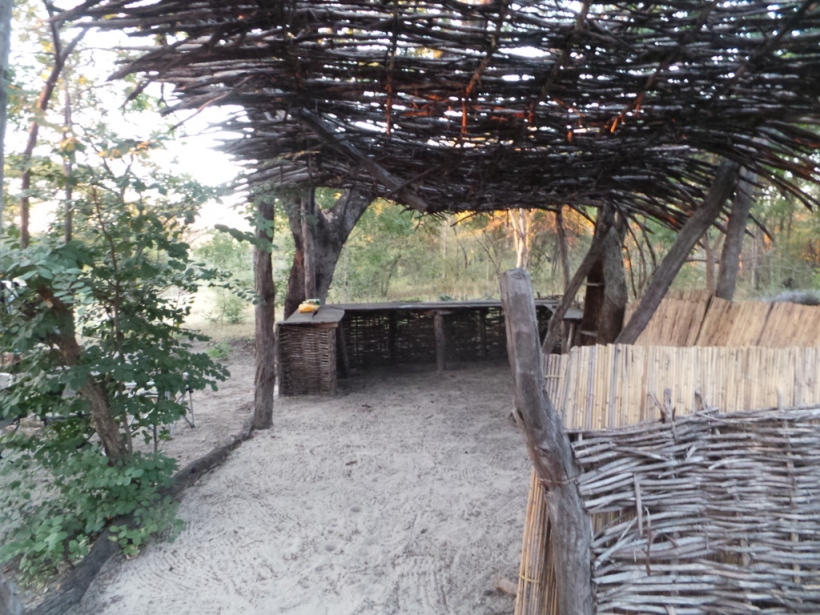 Our earliest start on the trip so far – we left at 7 AM 🙂 destination Sioma NP . We drove back south along the main road for about 90 KM and then turned off to the right , as indicated on the GPS , as there were no signs marking the park entrance road .

Initially the going was very easy , but it got progressively more difficult , as the road became less traveled .

We had to stop a couple of times , as Nick’s gearbox was overheating because of all the grass caught in the oil cooler. Seed nets did help (for those that had them ), but not much as the road became very overgrown . The 44 km to the park entrance (as shown on the GPS ) took about 2 1/2 hours .

Unfortunately we reached the way-point and the road dissapeared . As it was already past 12 and it looked like we had at least another 30 – 40 km to go , we decided to turn around and head for Livingstone , as to continue would make it a very long day tomorrow , and we had to be in Livingstone so that we could get Dena to the airport in Vic Falls on Friday .

So we headed South back in the direction of the border crossing and then turned left towards Livingstone.

We had met the owner of Camp Nkwazi while we were busy with the border formalities on our way in ,so we decided to check it out. 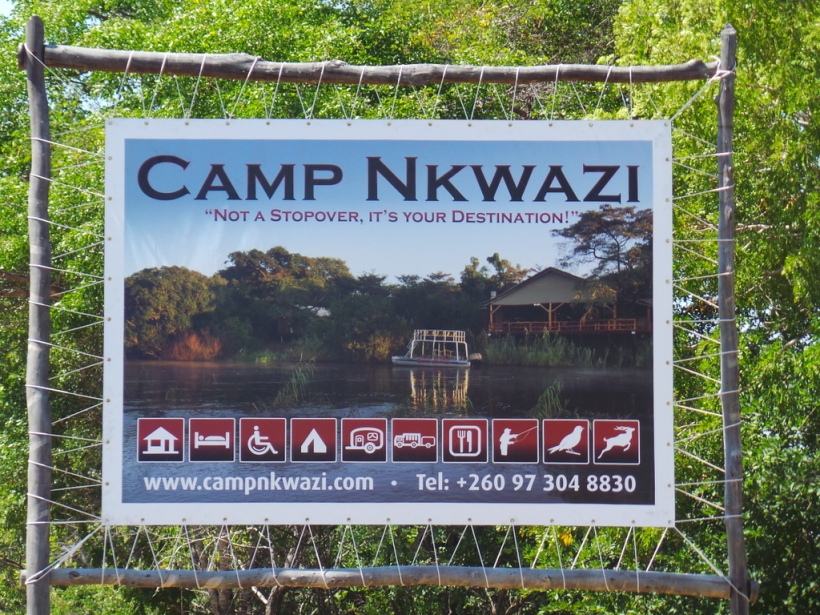 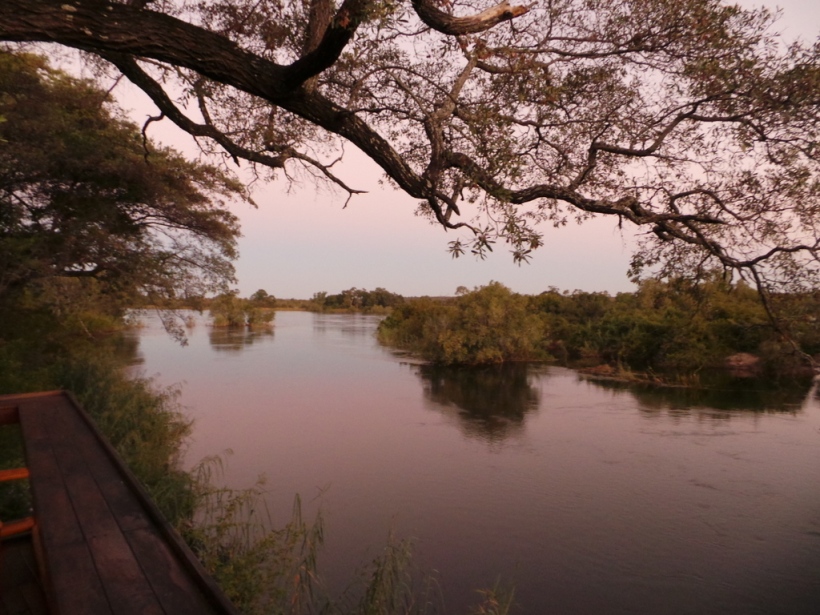 We decided that we would spend another night at Camp Nkwazi and booked a booze cruise for the evening .

As it was yours truly’s birthday , I said that I would like to go to the Falls , have pizza for lunch and then pink drinks at The Royal Livingstone , so off we went .

The falls were the fullest I’ve ever seen them and it didn’t take long to get soaking wet . 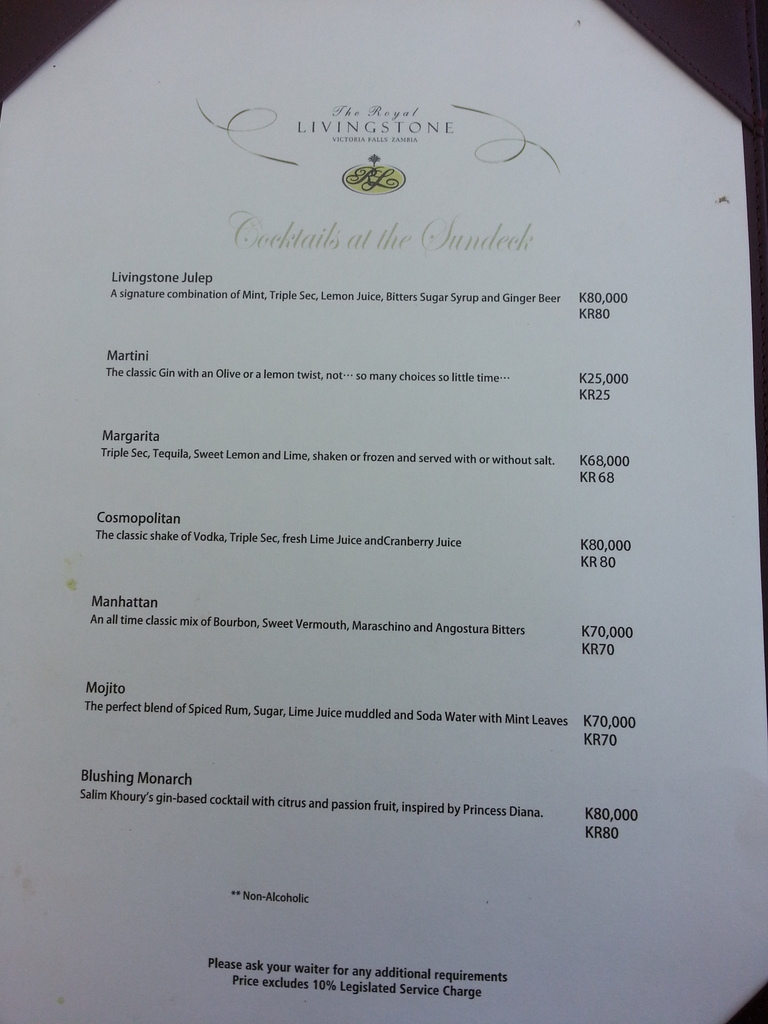 It was quite nice being in a small boat , as we could get in very close to the shore , and we were lucky to finally have some decent elephant sightings 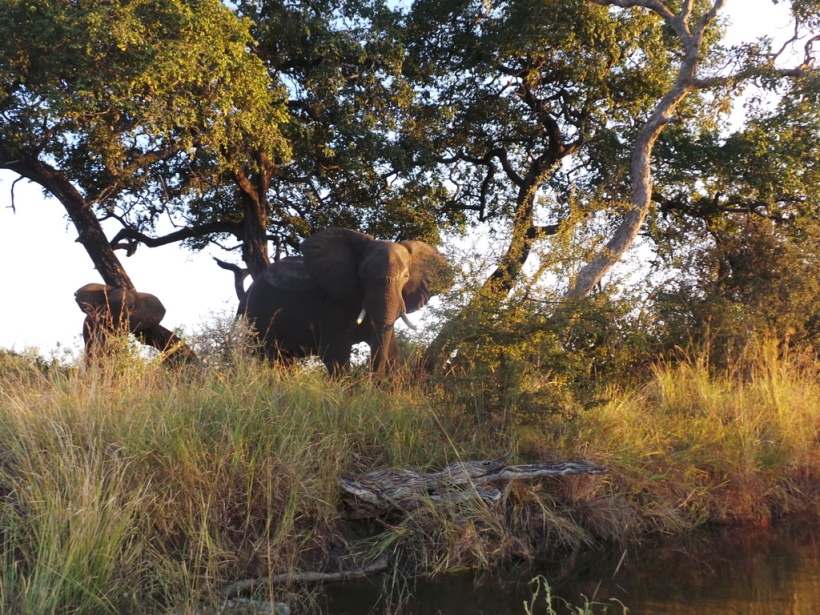 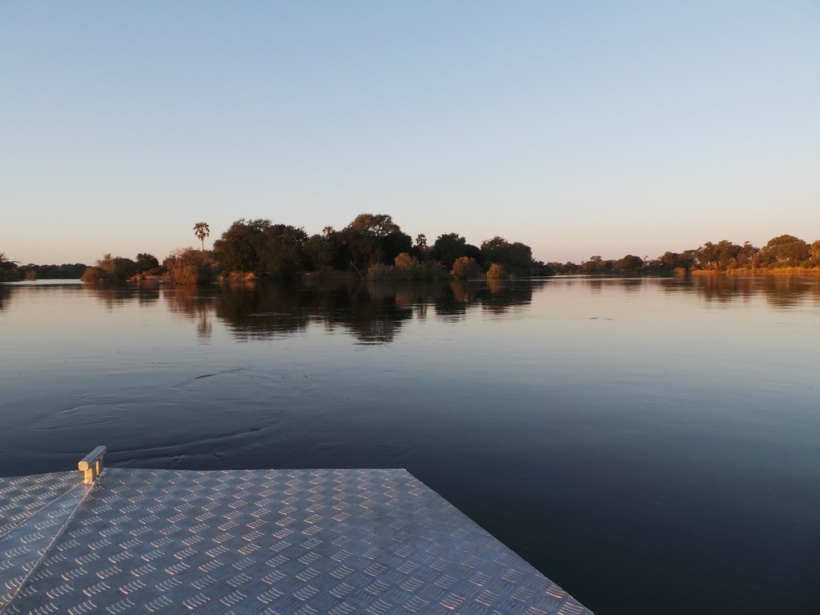 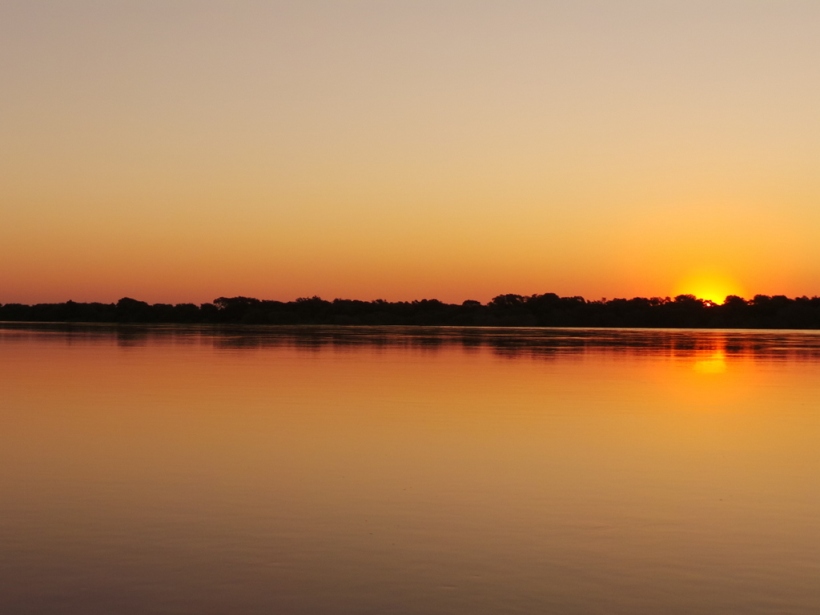 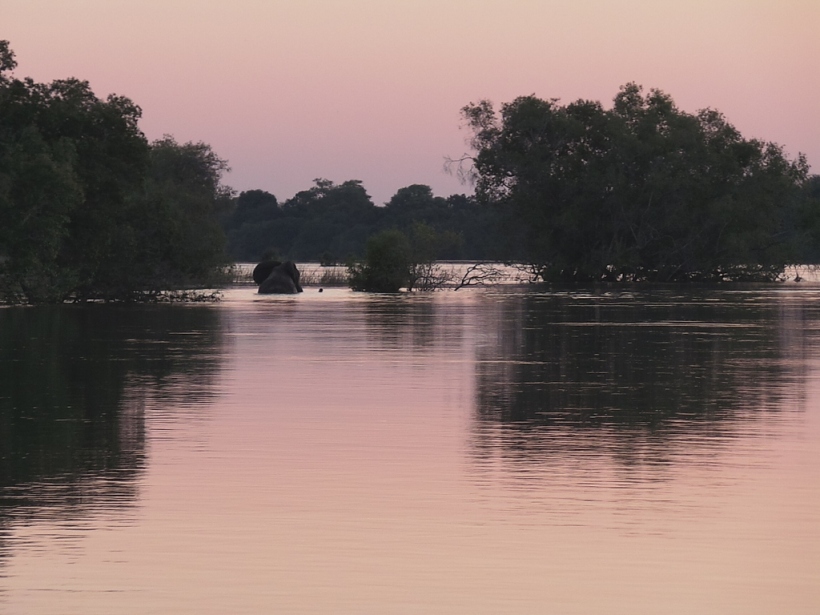 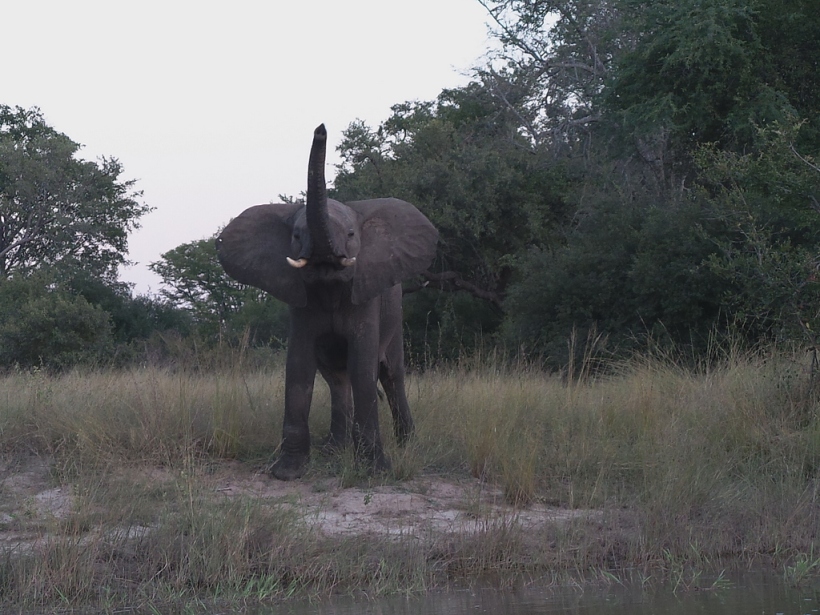 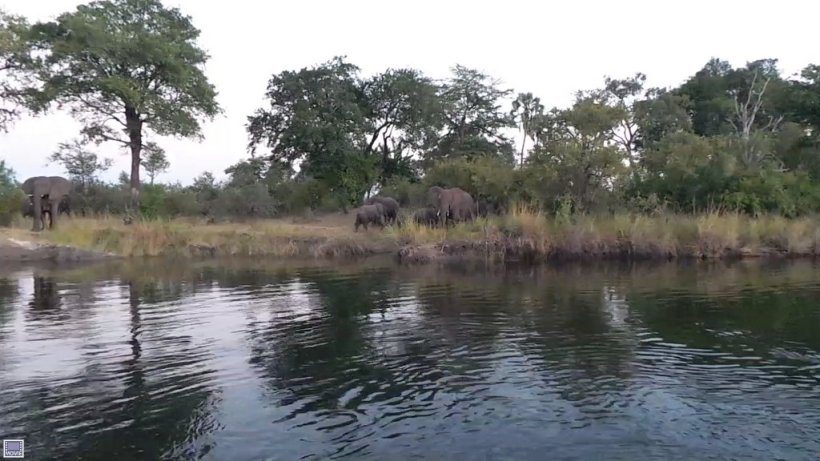 Back at camp , I had birthday jaffles 🙂 – thanks Dena 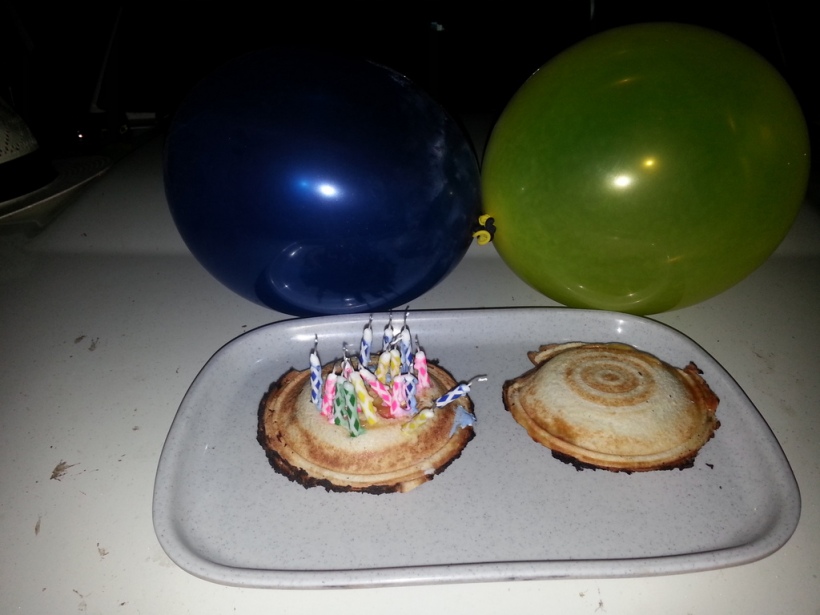 After settling our bill , we left at about 9 AM for the border .

The crossing was again fairly easy and quick on the Zambian side , but I was asked for a police clearance for the vehicle on the Zimbabwe side.I showed my bank authority letter and also my proof of insurance cover , but it still took a while to  convince  the customs official that I didn’t need one because the vehicle was not entering Zimbabwe from the South African side.

Also worth mentioning is that there was very little parking on the Zim side , and someone official looking kept trying to get me to park in an area that was clearly marked as no parking. I couldn’t help feeling that he was trying some sort of shakedown , so I ignored him and parked a bit further away.

It then took quite a while to find someone to open the border gate , but finally we where through .

We stopped for brunch in Vic Falls town and then Phillip and I left to take Dena to the airport. We were planning to spend the day in the Zambezi NP and leave early the next morning to go home via Hunters Road on the Botswana side.

Nick decided to carry on home via Zimbabwe , so we parted ways .

Phillip and I booked into the park and decided to stay at one of the fishing camps. But it was very run down , so we just drove further up the river and found a nice clump of trees instead .

The camp marker that 2 years earlier had been hidden in long grass . I brushed against it and caused over R80 000 damage to my Disco !

We went for a late afternoon game drive , and even after get a bit lost taking the road less traveled we saw very little game. Eventually we found our way back to the main road and realsied we had come out opposite Camp Nkwazi . This was a bonus , as we soon found the herd of ellie that we had seen from the boat the day before

As we had seen so little game , the whole trip , I suggested to Phillip that we give Hunter’s Road a miss and be home on Sunday in time for the Grand Prix.

We crossed into Botswana at Pandamatenga and saw that we were the first people to use the border in over a week . I again had to do a song and dance over the police clearance letter , but was eventually let through .

We arrive at Itumela at about 5 PM. Just in time for us to watch the Sharks play the Cheetahs and for me to win a case of beer off Phillip .

Another early night , but I don’t think Itumela will see me again . It was noisier than usual , and the party at the bar carried on until well past 1 AM.

Woke up to an unusual sight.  It was totally fogged in. We left at about 7 AM , crossed at Parr’s Halt , and were home in time to watch McClaren have another crap race .

We definitely took it too slow getting into Zambia. I would like to have spent more time exploring the Shisheke region ,and also further North . I will definitely be returning as soon as possible .

The lack of game sightings was a huge dissapointment , but I hope it can be put down to the time of the year .