Wildlife photographer Hannes Lochner spent 750 days in the harsh surroundings of the Kalahari Desert to chronicle
the life of a female leopard and in doing so delved into a dark and fascinating nocturnal world of big cats and other predators.

Through his incredible project, Mr Lochner, 41, documented the struggle of Luna the leopard to raise cubs in one of the most
punishing environments on earth, where big predators become more active at night, and when the photographer’s visibility is
severely diminished. Undeterred by the threat of the big cats, Mr Lochner spent thousands of hours in his Jeep at night, capturing
remarkable moments with Luna, a pride of lions, a pack of jackals and other predators.

Striking: The life of Luna the leopard was documented in stills by photographer Hannes Lochner over a two-year period

Mr Lochner travelled a colossal 100,000km during his time at the Kgalagadi Transfrontier Park in South Africa.
The images, collected in his new book ‘The Dark Side of the Kalahari’, capture the awe-inspiring beauty and breathtaking
diversity of life in the region. Shooting mostly at night, the Cape Town-born photographer had to brave night-time temperatures
of -13 in the winter, while trying to catch up on his sleep in sweltering 40C heat in the day.

‘I have always been fascinated by leopards, and my dream was to follow and document a leopard raising cubs in this Kalahari
hostile environment,’ Hannes said.’There are few female leopards in the south of the park, and we started tracking one with a cub
of 12 months old.

Magical: Filming Luna with her cubs was the highlight of Mr Lochner’s two-year project immersed in the Kalahari Desert,
describing the special moments with the cubs as ‘incredible’

Framed: Luna was the focus of Mr Lochner’s attention throughout the two years he spent in the desert,
following her day and night, but she was most active at night

‘She was not very accommodating, and took us at least three months to get used to us. She didn’t have a tracking device
so we had to track her the hard way. Lots of hours in the bush.’

Entertainment: During his two-year project, Mr Lochner was privy to a host of fascinating and often comical moments in the animal kingdom
in the Kalahari Desert, including this fox cub playing with a mouse 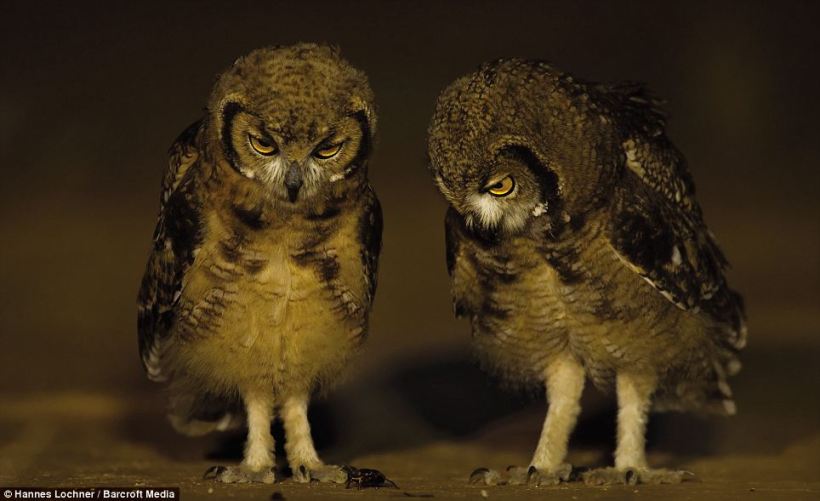 Baffled: These two owls appeared to be bemused and fascinated by an insect that scurried between them

All creatures great and small: Animals both large and small were snapped by Mr Lochner during his time in the Kalahari,
including this tiny lizard (L), snapped scuttling across the sand at night, and another lizard (R) captured balancing on a seed pod
as it blew in the wind

Also, unusually for leopards, she was regularly joined by ‘family man’ Oscar, the father of all three litters.

Lochner was accompanied on his travels by his partner Noa Koefler, who did all the film work for the project.
Her video clips can be seen on the App that will be released at the end October to accompany Lochner’s images.

First light: Luna had three litters of cubs throughout the two years she was photographed, the first and last set survived, the middle
set of cubs were taken by hyenas

Predator: Among the many predators in the desert that would eat Luna’s cubs were the lions

Close up: Fearless lions could easily take Luna’s cubs is the opportunity arose

High alert: Luna was alone in the desert protecting and feeding herself and her cubs; the lions worked in a pride and there were always
members on high alert for opportunities for food

Deadly: The roar of the lions and other greeting calls could be heard from miles across the desert

During the day, the pride of lions would often rest – as would Luna – as the temperatures rose and the flies came out

Pack: A group of jackals also posed a threat, capable of taking Luna’s cubs if hungry. Here they fight over the remains of a carcass
in the Kalahari, South Africa 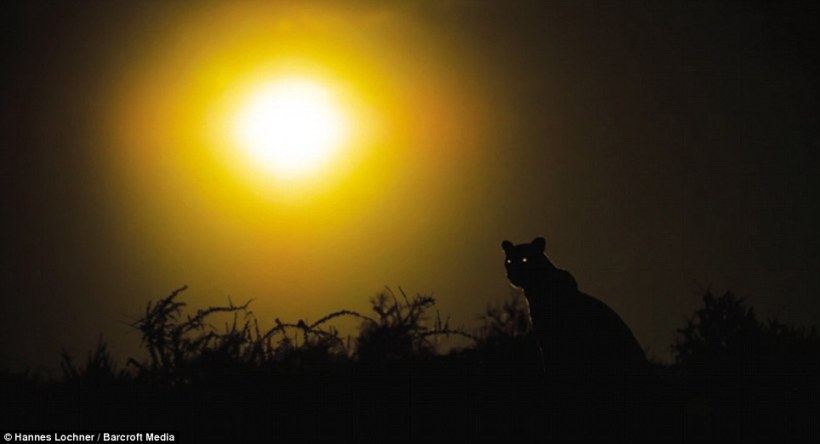 As the sun set, the big cats, including Luna and her cubs and the lions, would seek out opportunities for food and Mr Lochner
would begin taking his photos

Attentive: The striking looking female leopard scoured the desert when night fell searching for threats and opportunities for food

Asked to nominate his favourite moment from his two years in the Kalahari, Lochner goes for his time photographing Luna’s cubs.

‘They are amazing animals and incredible to photograph, we spent time at at least 12 different den sites,’ he added.

Snarl: A close-up of a leopard’s mouth shows a healthy set of sharp teeth to the camera

Dramatic: Night time work produced some incredible shots, including this lioness trying to sleep as thunder storm raged nearby

Beneath a blanket of stars, one leopard was captured walking past a magnificent lone tree in the desert

Serene: A single owl flew into a stunning night-time landscape of the Kalahari Desert, as lightning lit up the horizon

Silent: A lone leopard scans the vegetation from a rocky perch on a starry night, captured in this incredible time-elapsed photo
of the night sky 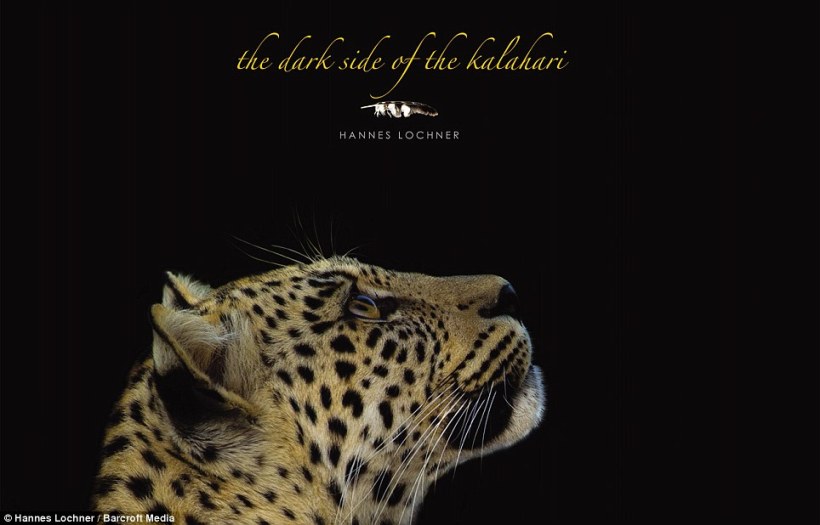