In Botswana – some great pics

This is the dramatic moment a protective mother elephant desperately fought off a fearsome pack of hyenas trying to attack her young calf.
The life and death struggle began as the dog-like mammals pounced on the unsuspecting baby elephant when it became separated from its mother.
Six of the hyenas launched themselves onto the calf’s back in a bid to bring it down, prompting the furious mother to swing into action.

Stampede! The furious mother elephant blunders into battle to save her calf from the hungry hyena pack

Eat dirt: One hyena gets a face full of dust as the elephant continues her assault on the pack

She stampeded towards the vicious creatures with such force that she left several trees uprooted in her wake.
The huge elephant kicked out her feet and swung her trunk at the pack, which quickly scattered.
She then returned to her calf, which had its tail bitten off during the encounter, but appeared otherwise unscathed.

Strength in numbers? The hyenas mobbed the baby elephant by jumping on its back in a bid to overpower it

Unequal battle: The hyenas stood no chance against the rage of a mother elephant, and several trees were uprooted in the heat of her rampage
The brutal encounter was witnessed by a group of stunned tourists, who were willing the mother on to victory.
Guide James Weis, of the tour company Eyes on Africa, was leading the group of visitors in the Linyanto bush in Botswana at the time.
James, 50, from Chicago, said: ‘We were out in three vehicles when we heard the shrieking of an elephant.
‘We went to investigate and found a small group of two large females elephants and two calves.
‘A pack of about 18 hyenas were trying to make inroads on the calf. 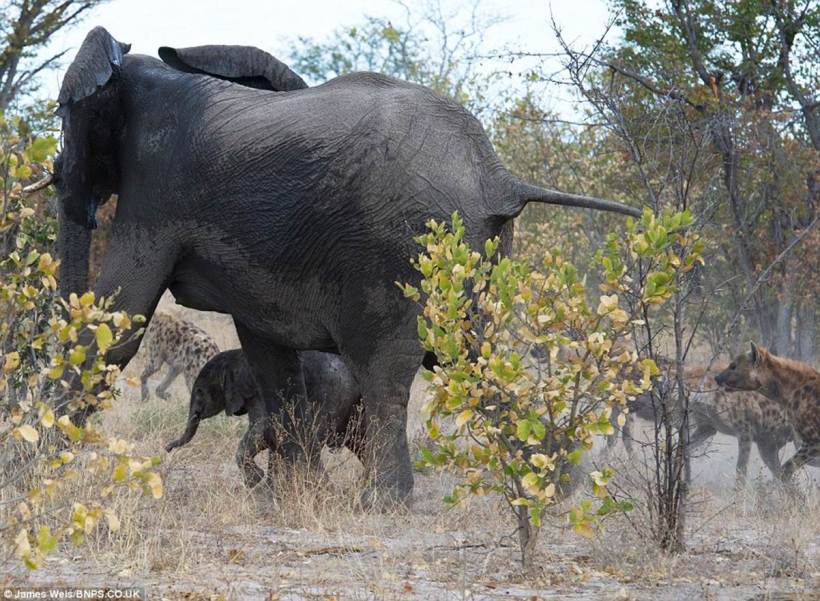 Laws of the jungle: The tiny calf takes shelter behind its mother as she repels the combined assault of the pack
‘They waited for the baby to come into a clearing and then two or three rushed at it.
‘When the mother chased them off the larger pack tried to attack the calf. It wasn’t alone for more than 10 seconds when the mother returned and was even more annoyed.
‘They were playing a dangerous game because had one hyena got in the way of her it would have been flung through the air like a beanbag.
‘She charged after the pack and was knocking over trees like they were matchsticks and the hyenas fled and scattered in a cloud of dust kicked up by the mother.
‘The baby had its tail bitten off, but was alright. It is fairly common to see elephants in Africa with no tail.
‘It was quite a dramatic thing to watch.’ 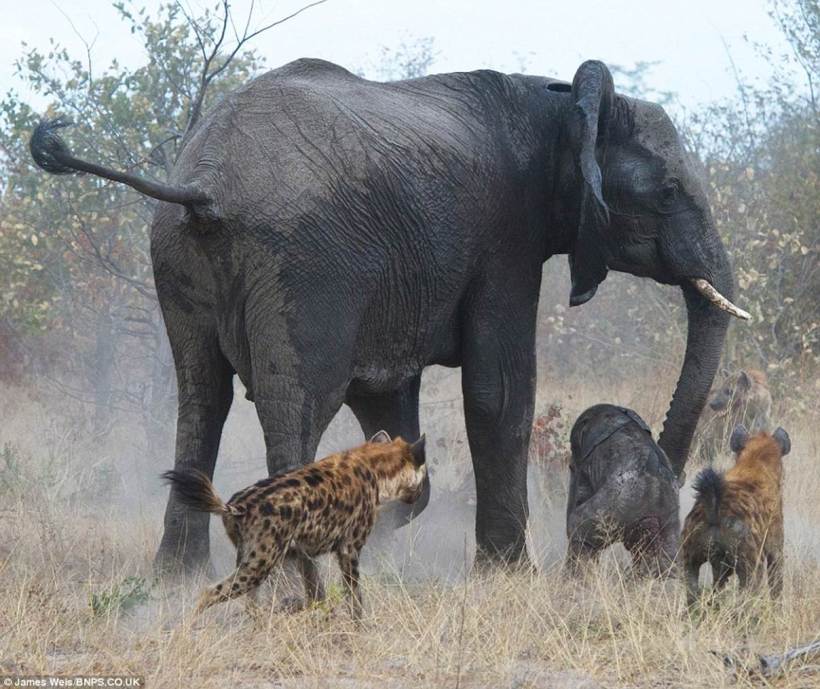 Under guard: The elephant calf lost its tail in the scrap, but lived to fight another day – thanks to mum

‘….And STAY out!’ The last hyena flees the scene with its tail between its legs